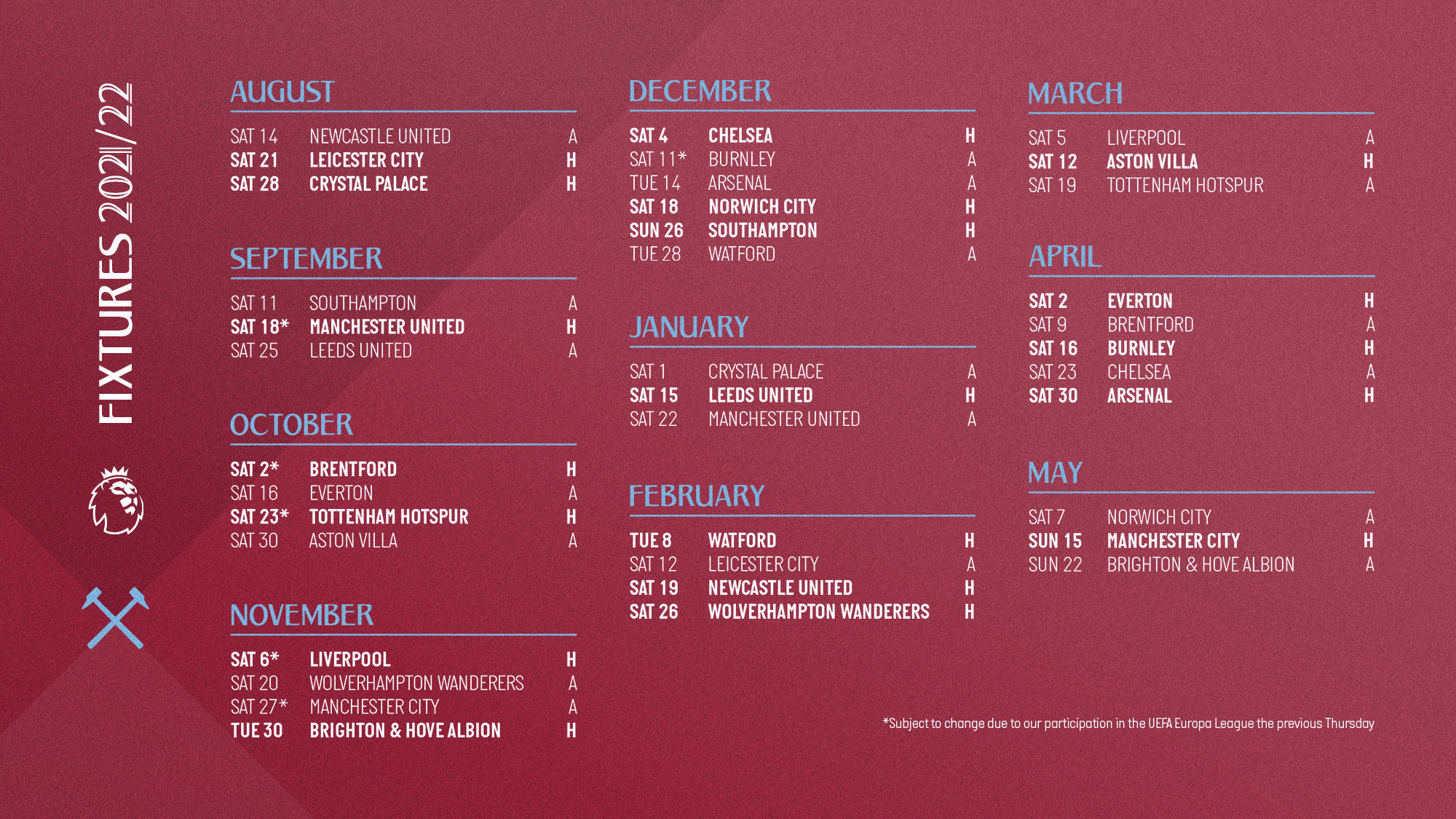 West Ham United will kick-off the 2021/22 Premier League season away at Newcastle United.

The Hammers face the Magpies on the opening day for the second campaign in a row – this time heading to St James’ Park on the weekend of Saturday 14 August to begin what promises to be a thrilling season.

August continues with a brace of home games, with Leicester City heading to London Stadium on Saturday 21 August, and Crystal Palace providing the first London derby opposition a week later.

The 2021/22 season concludes on the road, with David Moyes’ men heading to Brighton & Hove Albion on Sunday 22 May, while our final home game – and what could be skipper Mark Noble’s last run out at London Stadium – comes against the 2020/21 champions Manchester City.

Other notable dates in the calendar include a home Boxing Day clash with Southampton, while the festive season continues with local trips to take on Watford on Tuesday 28 December and Crystal Palace on New Year’s Day.

The derby matches against Tottenham Hotspur will be at home on the weekend of 23 October and away on Saturday 19 March.

West Ham’s first meetings with newly promoted Brentford takes place at home on the weekend of 2 October, while Norwich City visit on Saturday 18 December, before that festive trip to the third of the Premier League’s new boys, Watford.

Supporters should note that all Premier League fixtures are subject to change.

In addition, our home fixtures against Manchester United, Brentford, Tottenham Hotspur and Liverpool, and away games at Liverpool and Burnley are all subject to movement to the Sunday of that weekend due to our participation in the UEFA Europa League group stages the previous Thursday.

The UK broadcast selections for the early match rounds are due to be completed by 5 July.

In addition, the Hammers will begin their Carabao Cup challenge at the third-round stage in the week commencing Monday 20 September, while the Emirates FA Cup third round will be held over the weekend of Saturday 8 January 2022. Our UEFA Europa League campaign will begin on Thursday 16 September.