Liverpool have made an approach for Wolves and Spain winger Adama Traore, 25. (Football Insider)

Hector Bellerin, 26, wants to quit Arsenal and join Italian champions Inter Milan. The Spanish full-back was linked with a move away from the Emirates last term and Paris St-Germain then mentioned as the most likely destination. (FourFourTwo)

Liverpool are preparing a £35m bid for Atletico Madrid’s Spain midfielder Saul Niguez, 26. (AS – in Spanish)

West Ham face competition for Roma goalkeeper Robin Olsen, with Atletico Madrid and Lille keen. The Sweden international, 31, was in fine form during a season-long loan at Everton last season and his displays at Euro 2020 have attracted the Hammers. (AS, via WestHamZone)

Paris St-Germain believe they can land Paul Pogba for a cut-price £50m as they plot a raid for the 28-year-old Manchester United and France midfielder. (Star)

Chelsea’s France striker Olivier Giroud, 34, is on the verge of signing a two-year contract with Italian outfit AC Milan. (Mail)

Tottenham are considering a bid for highly-rated Wolfsburg defender Maxence Lacroix. The Frenchman, 21, joined the Bundesliga side from Sochaux last summer and has been likened to Rio Ferdinand. (The Boot Room)

Manchester United winger Tahith Chong is nearing a deal to join Birmingham on loan. The 21-year-old Dutchman has been out on loan in the past couple of years at Belgian outfit Club Brugge and German side Werder Bremen. (Telegraph)

Juventus right-back Danilo, 29, revealed he would like Gabriel Jesus – his ex-Manchester City team-mate and fellow Brazilian – to join him in Turin, with the 24-year-old striker linked with the Serie A side. (Sports Illustrated)

Tottenham, Leeds and Leicester City target Mikkel Damsgaard is set to become a Premier League player next season with the Denmark star’s agent in talks with a number of English clubs. Sampdoria president Massimo Ferrero said the forward, 21, has increased in value following impressive performances at the Euros. (HITC)

Liverpool boss Jurgen Klopp has told Anfield bosses the three players he wants this summer, including France winger Kingsley Coman. The 25-year-old Bayern Munich star could cost the Reds up to £86m. (Mirror)

Meanwhile, the Reds are also chasing the Netherlands international Donyell Malen after the 22-year-old PSV Eindhoven shone at Euro 2020. (Express) 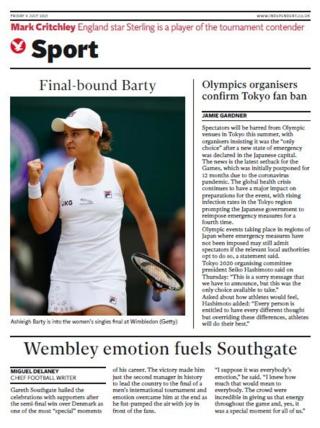 The front sport page of The Independent