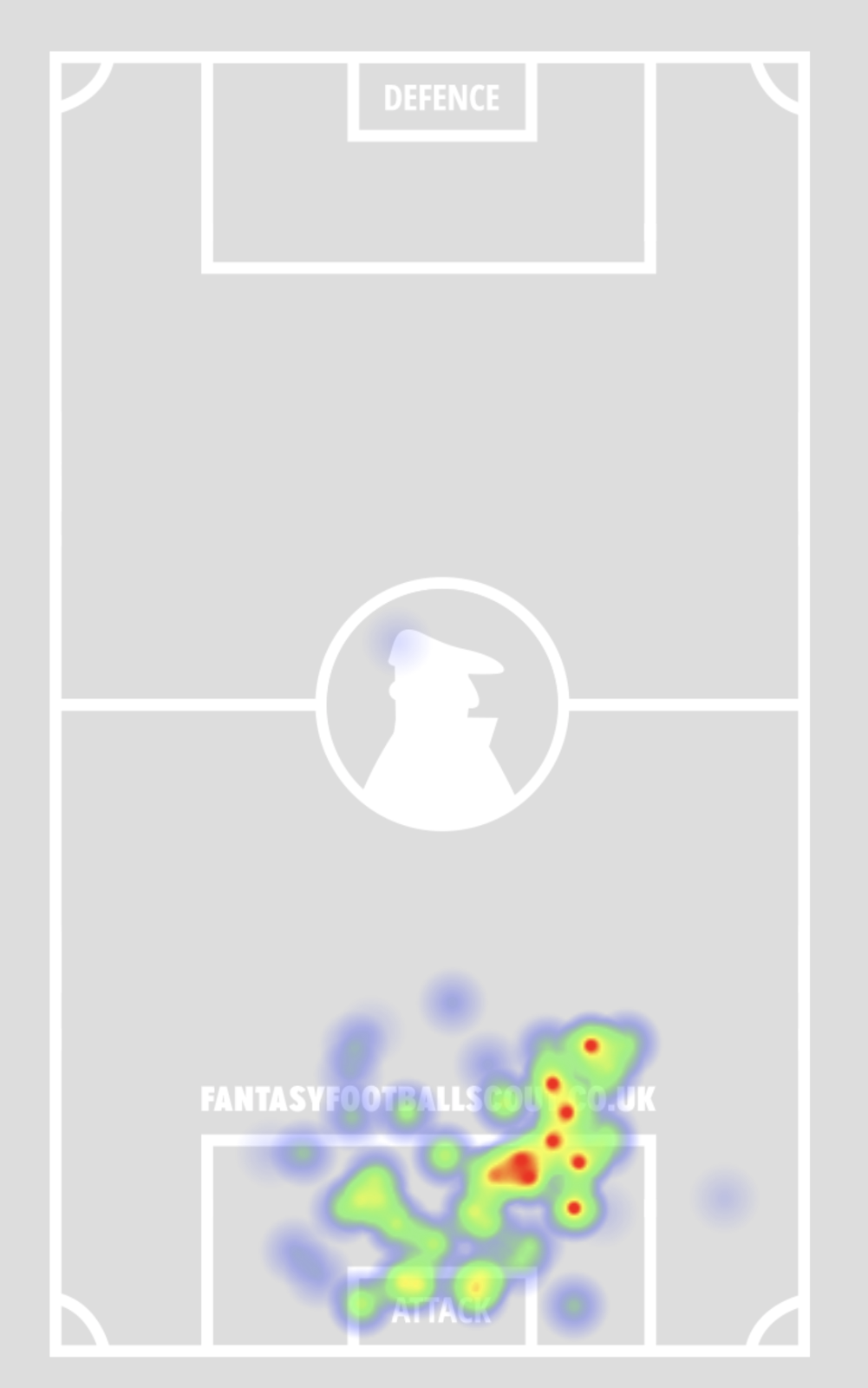 FPL is back after its international hiatus with the little controversy of another Double Gameweek announcement – Tottenham Hotspur will play twice in Gameweek 32.

As well as covering the usual captain dilemmas and some tasty one-week punts, the Guide to Gameweek 30 will look at how this affects our plans: what should we do with Gareth Bale (£9.6m) and could a “popular pasta dish” be on the menu?

We have a Saturday deadline this week and you have until 11:00 BST deadline to make any last-minute changes to your side.

Harry Kane (£11.6m) is set to be the popular armband pick against relegation-battling Newcastle United.

Kane created four chances, had four big chances, [and] get this – shots inside the box: eight, shots on target: six – these are prime Kane stats.

His impressive form over the last four matches led Joe to describe the England captain as the sensible choice. But is he the best choice?

Son Heung-min (£9.4m) looks set to recover from a bout of “international-itis” and could exploit a known weakness in Newcastle’s right flank. Joe and Pro Pundit Tom Freeman both highlighted the opportunity for the South Korean.

Tom noted that a switch to a back four at the end of January has seen the Magpies concede more chances down their right than any other team.

A vulnerability that fits neatly with Son’s shot heatmap this season.

And could adventurous left-back Sergio Reguilón (£5.5m) be another Spurs player to benefit from this area of susceptibility?

Penne for your thoughts

Speaking on the Scoutcast, Chris (aka el Fozzie) was not particularly impressed, pronouncing Reguilón’s name like a “popular pasta dish” (well it was dinner time), but Spurs aficionado Sam pointed to some encouraging stats for the former Real Madrid defender:

Reguilón has registered 17 attempts on goal so far this season … he is also top for successful crosses from open play among Mourinho’s squad.

While the Spaniard might be a step too Farfalle for some, not so for Ted, who added Reguilón to his plate of Spurs players ahead of Gameweek 29.

However, the graphic-creating manager found himself umming and ahhing about another of his new recruits, Gareth Bale.

Following a no-show in Gameweek 29, the Welshman’s subsequent comments weren’t great news for owners and Spurs fans alike. Season ticket-holder Sam felt that “they don’t hint at a player who is here for the benefit of the club and its supporters.”

Concerns over his game time make Bale a “wait and see” for high-flying Pro Pundit Andy. While Sam summarised the impact that Blank Gameweek 33 could have Mourinho’s team selection in her latest article:

Spurs will have both eyes firmly on the League Cup final against Man City, as it is now their only opportunity to bring silverware back to the Tottenham Hotspur Stadium this season. This could also have a big impact on the teams that Spurs set out in Double Gameweek 32, as the Southampton match falls just days before the trip to Wembley.

For Andy, the other issue with the blank in Gameweek 33 is that managers could potentially have a lot of money sitting on their bench in the form of Kane, Son and any Manchester City players.

I would argue that there’s a case to just stick with a couple of Spurs players for the double.

But with Spurs facing Sheffield United and Leeds United after the blank, benching our Lilywhites and selling Man City players could be the better ploy.

When revealing his analytical decision-making process, the former poker professional explained how he set aside bias and gut feeling as he methodically worked out if Lewis Dunk (£5.0m) was worth buying for a minus four.

A six-point return would suggest that he was.

“But even if [Dunk] blanked”, reasoned Fábio, “I would be happy with my decision of taking a hit, knowing that if I keep making transfers with a positive expected value in the future, it will work out more times than not.”

Just because someone blanked twice in a row, it doesn’t necessarily mean that he is suddenly a bad pick and the same applies to poker – just because you lost one hand, it doesn’t mean that you played it poorly.

I think that being able to distance myself from the short-term results is one of my biggest strengths in FPL and poker played a huge part in that.

I have generally found the good managers are the ones that are not affected by the results but focus on the process. Temperament is an incredibly underrated thing in FPL.

Another manager who has displayed an admirable temperament this season is Fábio’s closest rival at the top of our elite ranking system, Tom Stephenson.

As Greyhead noted when exploding the myth that a good start is crucial, the Hall of Fame No 2 was at the three million mark in Gameweek 3 but has risen to 4,261 – on track for a fifth top six thousand finish in six years.

Tom was Joe’s latest Meet the Manager guest during the IB and, like Fábio, plans to play his Wildcard in Gameweek 31. (Note that the interview was recorded before the Double Gameweek 32 announcement, so Tom included just Kane from Spurs.)

Aside from a good temperament, a further similarity Tom shares with Fábio is placing importance on ‘expected minutes’. For this reason he was reluctant to add Kevin De Bruyne (£11.9m) to his Wildcard squad:

I’m a little bit resentful about having to pay [nearly] 12 million and not know whether a player who I’d probably captain as well … is going to start.

The possible exception to this rule are one-week punts.

For those planning to play their Wildcard in Gameweek 31, Gameweek 30 presents just such an opportunity, with Tom among those considering a potentially rewarding move for Marcos Alonso (£5.7m).

The Spaniard, who was rested over the IB, is Tom Freeman’s top differential for the upcoming round of fixtures.

…When used correctly as a wing-back he has real quality, something Tuchel has recognised. Since Gameweek 21, when Alonso made a return to Chelsea’s starting XI in a 3-4-3 system, he has taken 13 shots. No defender can match that total during that period, despite limited minutes.

But as Chelsea embark on a lovely run, bringing in at least one of Edouard Mendy (£5.2m), César Azpilicueta (£5.8m) or Antonio Rüdiger (£4.7m) is more of a priority for those thinking long-term.

And while the two Toms and Sam are plotting moves for their first Blues defender, Andy is considering a double-up. With Rüdiger already part of his XV man squad, the popular Pro Pundit is looking to add Mendy in goal. Two could be the magic number:

I’d provide a word of caution on the triple-up, though. While it looks good for the next few weeks, and I’m sure it’s something that Gameweek 31 Wildcarders will consider, you also need to think ahead about how to get out of it when the fixtures turn in Gameweek 35.

In addition to Alonso, who Jan considers Chelsea’s best captain option in Gameweek 30, Joe threw Dominic Calvert-Lewin’s (£7.6m) name into the hat for one-week punts. The Everton forward has scored the most headed goals this season, while Crystal Palace have conceded the most headed chances.

Jan went against the grain in the latest edition of Captain Sensible. The double-points maestro did acknowledge, however, that Kane is a reliable pick:

While this might not be a truly high-scoring and convincing win by Mourinho’s men given Newcastle’s defence-first approach, it is difficult to suggest Kane is unlikely to get an attacking return.

But he feels that Leeds United have a better opportunity.

Over the last six matches, no team has conceded more shots on target than Sheffield United.

Raphinha (£5.7m) and Patrick Bamford (£6.7m) are therefore Jan’s first and second choices for the armband:

It is Leeds midfielder Raphinha who emerges as my top captaincy pick for Gameweek 30. The tricky winger tops the creativity charts for midfielders and is a constant goal threat too.

An opinion backed up by Ted on the Scoutcast, who confessed he would probably captain Raphinha if he had the guts.

But bravery might not be the only factor at play when deciding who to trust with the armband – effective ownership (EO) could play a part too.

There is no doubt in order to make serious ground, you need to bet against the template.

And there could be real rewards for being different and going against the crowd. When charting the finer points of EO, Az cited a thread by FPL Swede, who revealed that only five times in 29 Gameweeks had the most captained option been the highest-scoring player among the main runners and riders for the armband.

But knowing when to stick and when to twist is undoubtedly the key.

To illustrate his point, Az used two examples of his FPL Black Box co-host, Mark, paying attention to EO. The first was owning Timo Werner (£9.2m) in Gameweek 1, when Mark was protecting himself against the sizable ownership and unknown quantity the German presented.

The other was when he captained Raphinha over Bamford in Gameweek 25 and exploited the Brazilian’s status as a differential against Bamford’s big EO.

Don’t throw the baby out with the bath water

But don’t sell good assets just for the sake of differentiating, cautioned Zophar, “calculated risks are the key to ‘upside chasing’”.

The seven-time top eight thousand finisher looked ahead to the fixture swing in Gameweek 31, identifying the teams and players to target.

As former FPL winner Simon March counselled, fixtures, and their difficulty, are likely to have a significant influence on how players perform in the future. They can help us avoid the feeling that our new transfer has waited for us to fully buy into them before suddenly becoming useless.

So it was perhaps slightly surprising to find that Leeds pair Raphinha and Bamford were both included in Zophar’s selection, despite facing Manchester City, Liverpool, and Man United before Gameweek 34.

But Tom Stephenson agreed, including Raphinha in his Wildcard draft. Planning ahead, Tom noted that Leeds finish the season very well.

And Wolves offered a few names for consideration.

No defender has been afforded more big chances (three) than the Liverpool Academy product over the last six matches. And the return of Willy Boly (£5.4m) could help remedy Wolves’ vulnerability in the air.

During his in-depth look at Nuno Espírito Santo’s team, Neale highlighted that “goalscoring remains an ongoing issue: seven goals in their last 10 top-flight matches is this shot-shy season in microcosm.”

But Pedro Neto (£5.7m) presents the best attacking option for those tempted:

The Portuguese winger is top or joint-top among his teammates for the following metrics: shots on goal, shots in the box, efforts on target, big chances, penalty box touches, successful crosses, chances created and big chances created.

Neale reviewed the latest results in the FFS Open Cup and Members Cup.

There will be a new name on both trophies this season as the two remaining former winners, Lokomotiv and Pep Pig, were eliminated in Gameweek 29.

While the David vs Goliath clash of the lowest-ranked manager against the highest, came down to ‘rank difference’ as 415th-placed The Fighting Cock benefited from his lofty perch to overcome Jonathan Ojao following a 45-all tie.

The battling rooster takes on stonerrocks in round five of the Open Cup.

There are six rounds to go in both cups and the finals are set to take place in Gameweek 35.

Elsewhere, RedLightning brought us his usual round-up of the latest Community mini-leagues and competitions.

The Head-to-Head fixtures for Gameweek 30 can be found below.

The scores and tables are now updating every night on the Head-to-Head Leagues main page so you can keep track of the action as the Gameweek unfolds.

May your arrows be green!

Full-year memberships, monthly subscriptions and a FREE trial are all now available.

Join now to get the following: