1. Antonio at the double

Michail Antonio made a triumphant return to the West Ham United team at Turf Moor, scoring both goals to secure a 2-1 Premier League win over Burnley.

After missing two matches with a hamstring injury, Antonio was back to full fitness and back to his best, bullying the Clarets’ back line, dropping deep to link the play and both creating and getting on the end of chances.

Antonio had six goal attempts in total, including the powerful header and deft finish that brought him his goals, and arguably could have matched the four he scored at Norwich City last July.

While he did miss a succession of second-half opportunities, including one flicked effort from six yards that hit his standing leg, the No30 could not really be criticised for his performance.

And now he is just two goals from matching Paolo Di Canio’s all-time Club record of 47 Premier League goals, and is one behind current captain Mark Noble in second place.

Many more performances like the one we saw on a wet and windy Monday night in Lancashire and he will break that record before heading off for a well-earned summer holiday.

Nobody who has seen Tomáš Souček play will ever doubt the West Ham United midfielder’s aerial ability.

The 6’4 Czech is a colossus who not only has the physical attributes that make him almost unstoppable when the ball is in the air, but also the desire and sense of timing to win more headers than anyone else.

Those strengths were repeatedly evident at Burnley on Monday evening, when Souček won an incredible 17 aerial battles – two more than the entire home team, whose direct approach is based, in part on winning headers! 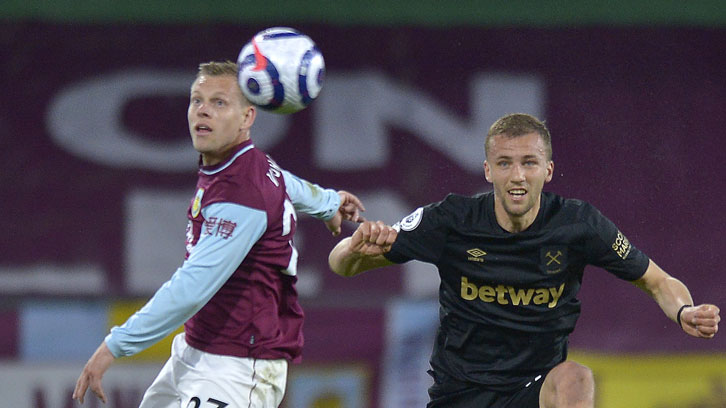 Souček has now won 204 aerial battles this season, 37 more than Crystal Palace forward Christian Benteke in second place, and more than twice as many as the next highest midfielder, Wolverhampton Wanderers’ Leander Dendoncker, who has won 84.

One day soon, Saïd Benrahma will score his first goal for West Ham United, and when he does there will be a huge outpouring of celebration!

The popular Algerian has now had 30 shots on goal for the Hammers, but he has yet to find the net.

Benrahma came as close as he has ever come to breaking that duck at Burnley, where Michail Antonio flicked his goal-bound cross into the net when the ball looked to be heading for the bottom right-hand corner. A few minutes later, the No9 curled a shot inches wide of the same corner, leading the 24-year-old to cover his face with his hands. No matter, the attacker was still hugely influential to West Ham’s vital win, repeatedly combining with his teammates to open up the home defence, with five of his passes leading to goal attempts in addition to the assist he provided for Antonio’s goal.

What made his performance all the more impressive was that he kicked-off the game having not eaten or drunk anything for more than 12 hours, as he is observing Ramadan, the Islamic fasting, prayer, reflection and community during which Muslims do not consume anything during between dawn and dusk.

Some West Ham United supporters may have been surprised when they took their first look at David Moyes’ team selection for Monday’s game.

Not only were Angelo Ogbonna and Mark Noble’s names missing from it due to injuries, and Michail Antonio’s present on it following his recovery from a hamstring problem, but Manuel Lanzini’s was also present.

The No10 had started just three Premier League matches this season and had played just 217 minutes of top-flight football this year prior to the trip to Burnley.

No matter, said Moyes (in selection meetings, at least), who deployed the talented Argentina international in a deep-lying midfield role alongside Tomáš Souček – a position he filled in the U23s’ recent win over Everton at Rush Green, where the manager was among the spectators. 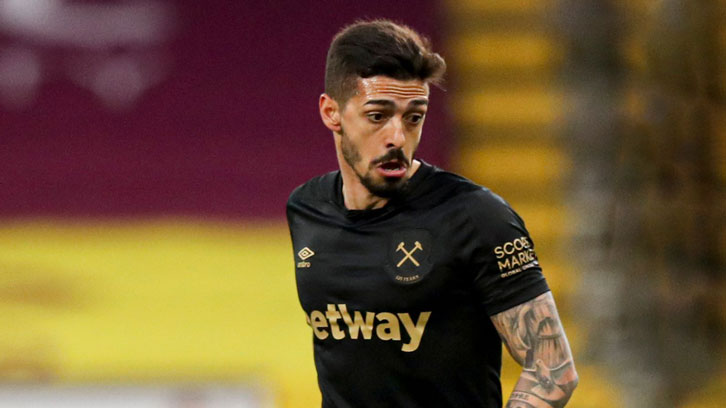 On a horrible night conditions-wise at Turf Moor, he used his wonderful technique, quick feet and sharp football brain to repeatedly help snuff out Burnley attacks and set his own team on the attack.

The 28-year-old completed 74 of his 78 passes to give him 94.9% accuracy, and also made a tackle and two clearances, while his intelligent positioning meant he was always available to collect the ball from the back four, or pick up loose balls in the area between his own penalty area and the halfway line.

With Noble and Declan Rice absent, Lanzini stepped in, in an unfamiliar position, and played a starring role in West Ham’s victory.