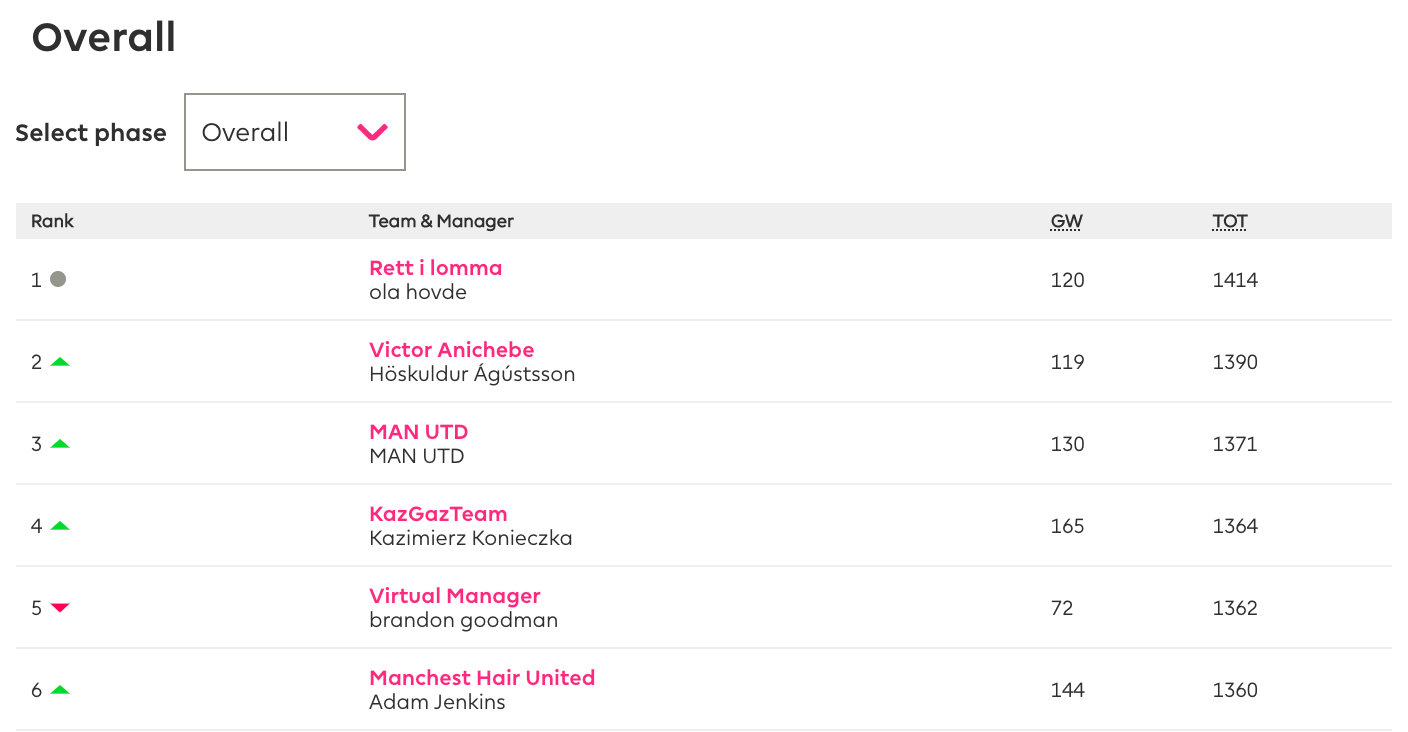 Welcome to the Gameweek 19 round-up of the Fantasy Football Scout mini-leagues and community competitions, a Double Gameweek in which many high scores were achieved and many mini-leagues found themselves with new leaders.

League code: Available on Members and Home pages when signed in.
Eligibility: Open to all those who have a registered Fantasy Football Scout account – paid or free.

Adam Jenkins is the new No 1 in our Fantasy Football Scout Community Members mini-league after playing his Free Hit for 60 points in Gameweek 18 followed by a Bench Boosted 144 (-8) in Gameweek 19. Adam has a 13-point lead over second-placed Peter Barone, and is sixth overall.

Long time mini-league leader Maruf Hossain, who has not played a chip since Gameweek 5, drops to fourth and is down to 29th overall.

This is only Adam’s third season, having finished 57,561st last year.

The FFScout Community Members mini-league is now the Best League in FPL based on the average score of the top five teams. This is a position previously held by the open-to-all Fantasy Football Scout mini-league.

Our current top five are Adam Jenkins, Peter Barone, Ulrik Varela Greve, Maruf Hossain and Kevin Rose, all of whom are in the overall top 44.

The table below, courtesy of Mini-League Mate, shows the top 20 leaderboard.

Maruf’s poor form over the last five Gameweeks is evident from the table above – the former leader has amassed just 309 points, exactly 100 points less than the in-form Adam.

But there is hope for Maruf as he’s the only top-20 manager to have a full complement of chips remaining, and he has the best team value (£105.9m) among the leading group.

Meanwhile, third-placed Ulrik Varela Greve has played all his chips apart from the Bench Boost, and yet he may have wished he had done given that his 179 bench points is more than anyone in the top 20 this season.

A reminder that to receive your free copy of the Dossier for the Community Members mini-league, please go to the Mini League Mate website to sign-up. The League ID is 584. The Dossier will be emailed to you at the end of each Gameweek.

We’re dishing out £2,500-worth of giveaways throughout the season, however only those who have registered a Fantasy Football Scout account (paid or free) will be able to claim a prize. Also, managers must be registered one month in advance of the awarding of a specific prize to be eligible.

The manager of the month for January will be announced after Gameweek 21. The previous recipients of a £50 Amazon voucher are:

Mark Hinksman is the new leader of the Fantasy Football Scout mini-league. Mark followed up the 61 points on his Free Hit in Gameweek 18 with a Bench Boosted 151 (-4) in Gameweek 19, and is now 28th overall. Maruf Hossain is level with him on points but has made a greater number of transfers.

Last week’s leader Will Thorp’s Bench Boost only returned 87 points and he drops to seventh.

There are currently 49,066 people participating in the open-to-all Fantasy Football Scout mini-league.

Ville Tuominen (aka Santigold) won again in League 1 to maintain his one point lead over Meet the Manager guest Aleksander Våge Nilsen (aka AleksanderVN).

Chris Astin also won again in League 7 Division 18 and is still the highest scoring manager in our head-to-head leagues with 54 points out of a possible 57. He is now 130th overall.

A fixtures table will be published in the Scout’s Guide to Gameweek 20 ahead of the deadline. However, if you can’t wait to find out who you are playing next, follow this link. Use your browser’s find in page function (Ctrl+F) to locate managers.

All this information and more is contained in the main Head-to-Head page.

In total there were 4,557 entries to this year’s competition and just 1,148 went through to Gameweek 20, when a further 9% will be eliminated.

Aside from bragging rights, the winner will receive a free Fantasy Football Scout Membership for the 2021/22 season.

You are able to keep tabs on the action throughout the season via Ragabolly’s website Live FPL.

Gameweek 19’s highest-scoring manager was J S, who posted an impressive 164 points. The West Ham fan has been playing since at least 2006/7 and has finished in the top 10,000 on five occasions.

Andy LTFPL has overtaken Fabio Borges to become the highest ranked of our Pro Pundits.

He has also regained the lead in the FFS Mods & Cons mini-league. The Man United fan is now 13 points ahead of FFS Front End Developer Joe Collett and 22 ahead of last week’s leader Jack Penn (aka ZoumasBloomers).

The aforementioned Joe Collett still leads the Fantasy Football Scout Network mini-league, which is for the Scout Network and includes six of the Pro Pundits. He is up to 6,206th overall, 43 points ahead of Live FPL creator Mohamed Ragab (aka Ragabolly).

Alaa Khaled Mokhtar held onto first place in my Top 10k Any Season mini-league (league code: 8kcvzq) despite slipping to 384th overall after Triple Captaining Kevin De Bruyne for 106 points. But he is now ten points ahead of Justin Singh and Charles Hazel.

However, Phil Olorenshaw has taken the lead in Chaballer’s Hall of Fame >Top 1k< mini-league (league code: mr8dyh) after playing his Free Hit for 50 points in Gameweek 18 and Bench Boosting for 153 (-8) in Gameweek 19. He’s up to 1,076th overall, eight points ahead of Craig Eady and 20 ahead of last week’s leader Mike Varcoe.

2016/17 Champion Ben Crabtree has taken the lead in Simon March’s FPL Champions League and is up to 144k overall after playing his Bench Boost. But last week’s leader, 2009/10 Winner Jon Reeson (aka Westfield Irons), is only one point behind.

BEST OF THE REST

Andy Short remains comfortably in charge of Skooldaze’s FPL Vets 2006 or before mini-league despite slipping to 2,477th overall – Andy has a 55-point cushion over second-placed Sng Junyang.

Greg Brożyński is the new leader of Greyhead’s The Next Great and The Good mini-league and is up to 2,610th overall, ten points ahead of Gareth Bridges. Last week’s leader Damien Dunnion drops to sixth. This is Greg’s tenth season, his best previous finish being 1,435th in 2014/15.

Benny Hanaphy takes over at the top of my January to May League (league code h62bh1) which started scoring in Gameweek 17.

To join a featured mini-league that you are eligible for, simply enter the League code in the ‘Join private league‘ section on the FPL site. Any questions relating to community competitions please email geoff@fantasyfootballscout.co.uk or comment below this article.