We have all been consumed by the excitement of the World Cup over the last few weeks but with only eight nations still involved and the final itself 11 days away, an old friend is waiting in the wings.

The Premier League, and therefore Fantasy Premier League, returns on December 26 — the traditional Boxing Day fixtures that are a treasured feature of the English football year — and FPL managers have several big decisions to make ahead of the game’s resumption.

Our teams have sat untouched for a while now, but the fact we are allowed to make unlimited transfers before the next gameweek means there is plenty of preparation to do.

The story that will dominate the return of FPL is which players will even be available for Gameweek 17.

Players from nations that go deep into the World Cup (the final is on December 18, the third-place play-off the day before) may be given a small break, instead of going straight back into Premier League action.

However, there is a huge pool of Premier League players who either didn’t go to Qatar at all or whose countries departed after the group stage ended.

The Athletic takes a look at which players should be refreshed for those Boxing Day fixtures and which are likely to be exhausted and in need of some time off before returning to club business.

Crucially, the top points scorer in the game, Erling Haaland (£12.2m) is Norwegian, and Norway did not qualify for Qatar so he should be fully recovered from the knock which hindered him in the final three gameweeks before the break for the World Cup began on November 13. Haaland has scored a sensational 18 league goals already in his debut season with Manchester City and is well on course to set records in both the Premier League and FPL.

Kevin De Bruyne (£12.6m) returned early to champions City, after his Belgium side failed to progress into the knockout rounds. He delivered two goals and four assists in the eight gameweeks before the Premier League paused.

Belgium’s exit after three games also means Brighton welcomed back Leandro Trossard (£7.1m) sooner than they might have expected. He has been one of the surprise packages of the season so far, with 10 attacking returns.

Leeds United’s Rodrigo Moreno (£6.3m) and Newcastle’s Miguel Almiron (£5.8m) have also scored a significant number of goals this season and didn’t go to Qatar. Many managers couldn’t get Almiron in their teams before the World Cup as they already had three Newcastle players across the different positions. That can now be rectified with the unlimited transfers and he still offers great value.

Mohamed Salah (£12.8m), who scored four goals in his last six league games before the break, is another who was not involved in the World Cup after Egypt failed to qualify. He should be rested and raring to go come Liverpool’s Boxing Day trip to Aston Villa.

Liverpool’s Mohamed Salah has not gone to the World Cup and should be raring to go on Boxing Day (Photo: Jan Kruger/Getty Images)

Uruguay not getting out of their group means Jurgen Klopp also has Darwin Nunez (£9m) available, with fellow striker Roberto Firmino (£8.1m) failing to make Brazil’s squad for the tournament. Nunez has five goals, while Firmino has seven. It could be wise to stock up on attack-minded Liverpool players.

Martin Odegaard (£6.4m) also didn’t go to Qatar for the same reasons countryman Haaland didn’t, but his Arsenal side’s attack could be missing some key players, with his fellow midfielders Gabriel Martinelli (£6.8m) and Bukayo Saka (£8m) into the last eight with Brazil and England respectively.

Perhaps crucially for the Arsenal, Gabriel Jesus (£8m) is set to miss three months with a knee injury sustained at the World Cup. The Brazilian will be a big loss, having delivered 11 attacking returns in FPL this season, but his absence could open the door for Eddie Nketiah (£6.5m), who managed five goals when he got a similar opportunity in the second half of last season.

Aleksandar Mitrovic (£6.8m) is another who boarded an early plane home from the World Cup as Serbia fell at the group-stage hurdle and can now build on his nine goals in 12 starts for Fulham.

There’s nothing more exciting in FPL than the hope that comes with a Double Gameweek, and last week the Premier League announced we have three of them coming up.

Fourteen fixtures were postponed in the first part of the season, including an entire round in Gameweek 7 following the Queen’s death.

The priority for the Premier League was to rearrange fixtures for those clubs still involved in European competitions.

As things stand, we will have three small Double Gameweeks in the New Year, with one of those provisional, based on FA Cup third-round results.

There is potential for more fixture rearrangements to be announced shortly. 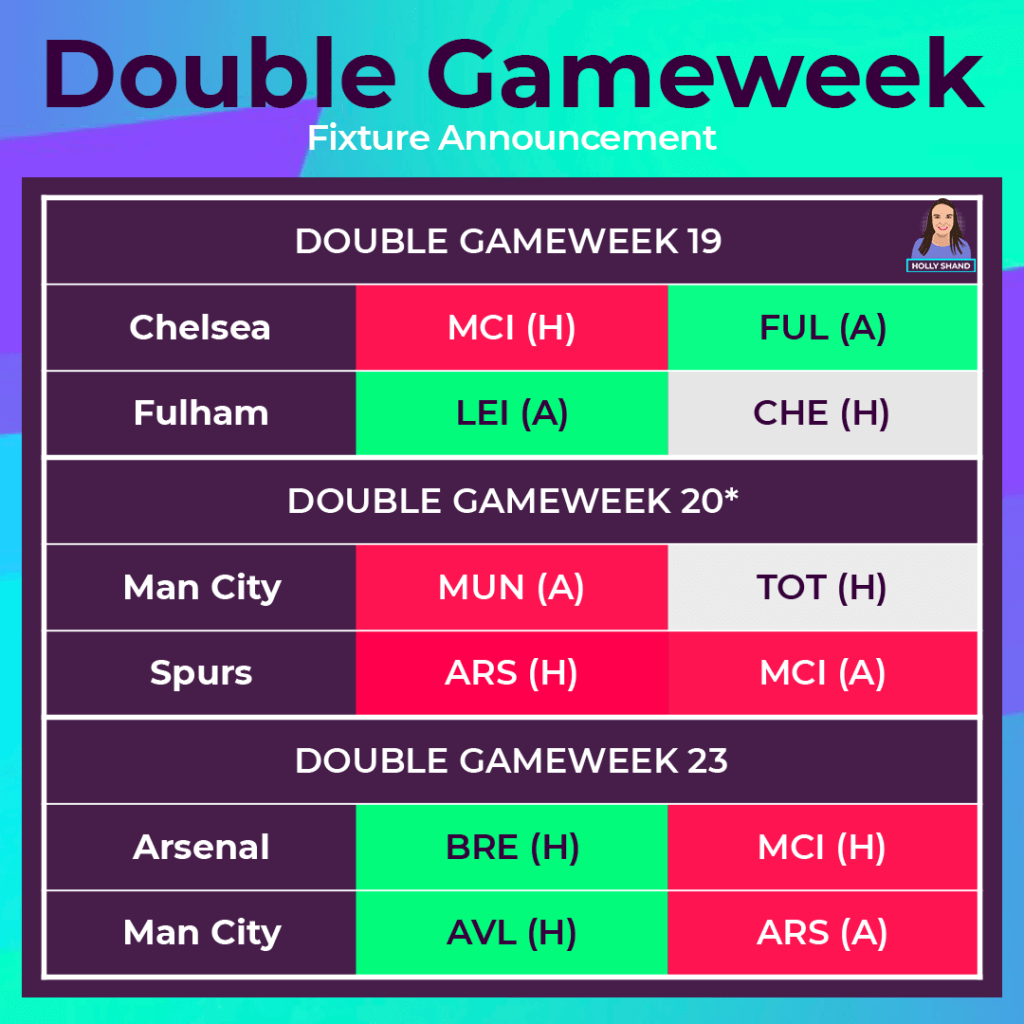 City are involved in two of them: Gameweek 20 and Gameweek 23. This makes it highly advisable to have three of their players in your squad.

Haaland is already the most-owned player in the game, only Martinelli is in more teams than De Bruyne among midfielders and Joao Cancelo (£7.4m) trails just Kieran Trippier of Newcastle in terms of defenders in the highest number of fantasy squads.

We also need to consider the wider fixture calendar, ranked by difficulty over the next four gameweeks. 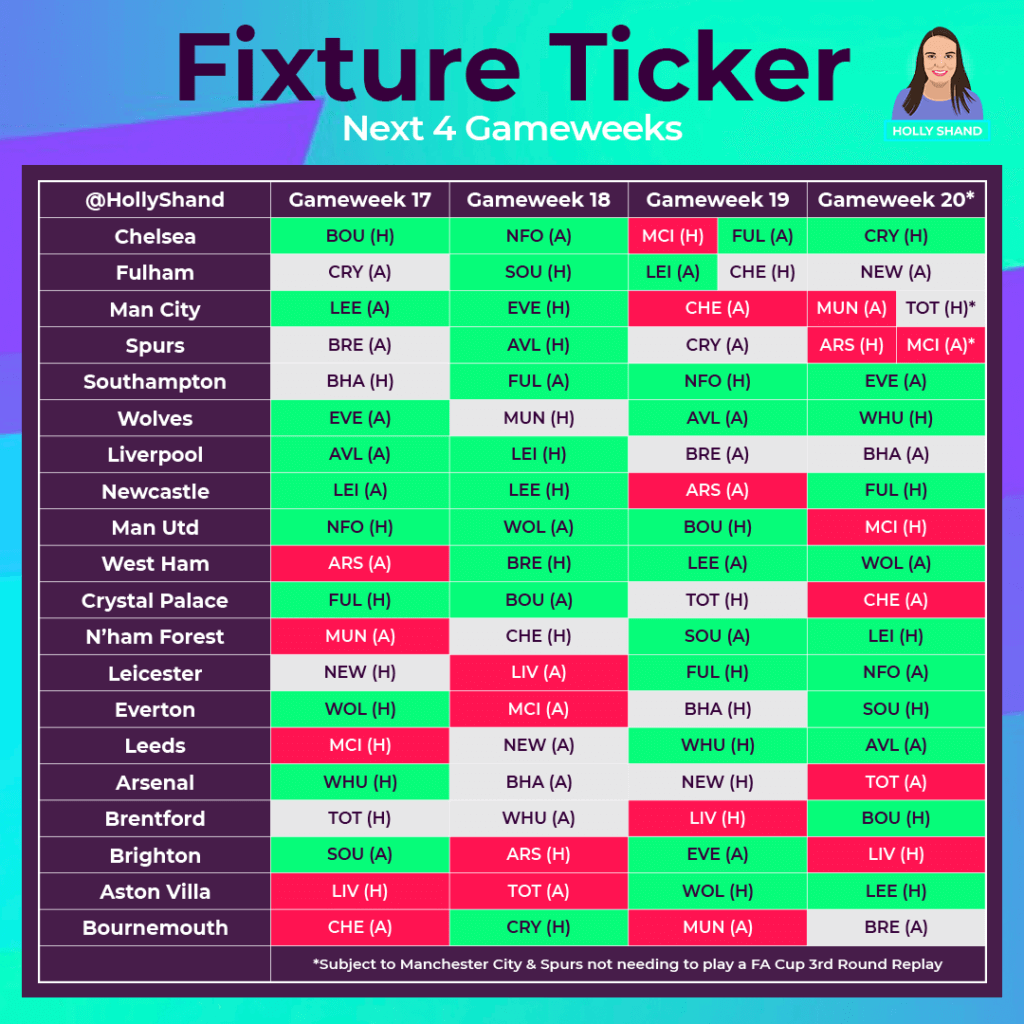 Chelsea top the list with four favourable fixtures and a Double Gameweek. It’s been a challenging start to the season for them, with Mason Mount (£7.5m) their highest-scoring player.

Games against all three promoted sides in the above schedule make Chelsea assets desirable. We will need to wait for news on whether Reece James (£5.8m) is ready to return from the knee injury that cost him a place in England’s World Cup squad. He has two attacking returns in six league starts this season.

An early return from the World Cup for Mitrovic coincides with excellent fixtures for Fulham, including a Double Gameweek. I’m still backing him to get close to averaging a goal per start across the 38 games. His team-mate Andreas Pereira (£4.6m) will remain the game’s go-to cheap midfielder, with two goals and five assists.

Tottenham players must also be considered, given the proposed Double Gameweek fixture they have in Gameweek 20, albeit that involves playing Arsenal and City. The difficulty stems from the fact their most prolific FPL asset, Harry Kane (£11.6m) will be involved in the World Cup quarter-finals this weekend, and possibly beyond.

Liverpool must also be considered, as they avoid the rest of the current top six in their next four outings. This will make it very challenging to leave Salah out of our squads.

It should be noted that it is perfectly viable to have three premium players in our squads, as the game’s highest-priced defenders have struggled this season.

Make sure to check out the FPL General on The Athletic FPL Podcast twice a week this season for all his latest tips and tricks.