BBC Sport football expert Mark Lawrenson is taking on BBC Radio 5 Live’s pundits, presenters and commentators to predict the outcome of every game at the 2020 European Championship.

With just the final remaining, Rob Green is in pole position and only Ian Dennis and Vicki Sparks can catch him.

At the other end of the table, Lawro’s late resurgence continued as he picked up 40 points from England’s semi-final win over Denmark, but he remains bottom – for now. 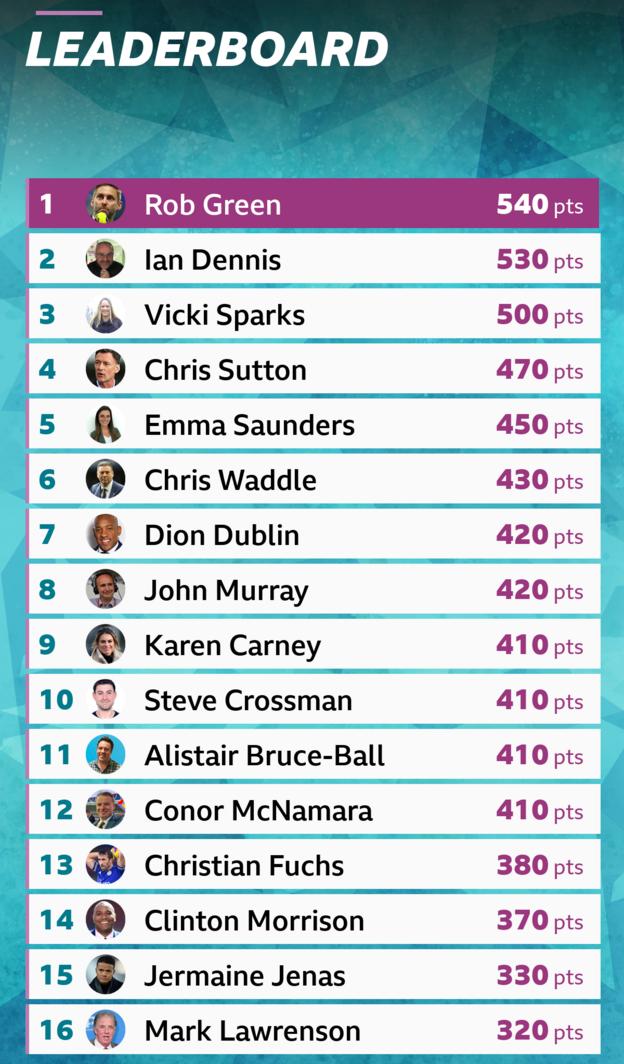 Lawro’s prediction for the final of Euro 2020

P next to team name = team won on penalties

A correct result (picking whether a team wins or loses, whether it happens in normal time or after extra time or penalties) is worth 10 points. So, if you tip England to beat Italy 2-1 and the Three Lions end up winning on penalties, you get 10 points.

The exact score earns 40 points, as does correctly predicting that a team will win on penalties, regardless of the score, correct or not. So if you tip England 2-2P Italy and the game finishes 1-1 but Italy win on penalties, you get 40 points, the same as if you get if you had said England 1-1P Italy. 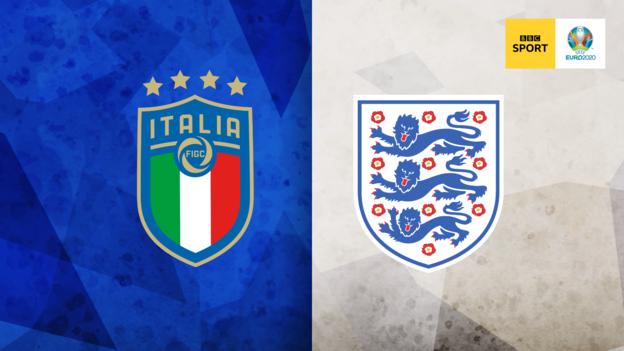 This is a fitting finale to an extremely good tournament, and it will be a very close game. Italy have been the best team at Euro 2020, but England are not far behind them.

Playing at Wembley in front of their own fans will help England of course, but I don’t think it will faze Italy. In fact they will probably enjoy it – the louder the home support, the better.

I can see it turning it into a tactical battle, and it is very hard to call it.

England boss Gareth Southgate has been very good at sussing out the opposition in this tournament and I’d back him to get his tactics right again this time.

Southgate could go with three or four at the back here and he knows England will be solid at the back – Kyle Walker is just rapid and has been really good as a right-back or centre-half. He has the pace and the awareness to get his team out of trouble if Italy get behind them.

This time, there is a decision to be made for England further forward too. Italy play a definitive 4-3-3 formation and I wonder if Southgate might try to match them in the middle if he’s worried about being outnumbered there. He could ask Mason Mount to drop a bit deeper or maybe he brings in Jordan Henderson for this one – that’s probably the biggest thing to get right for England.

Getting the first goal is going to be even more important than usual because if Italy’s centre-halves Giorgio Chiellini and Leonardo Bonucci lose a bit of cover while their team chase the game, they are not going to find it easy having Raheem Sterling and others flying at them.

You could argue the same about England, of course, because they have been cautious a lot of the time, and have had Kalvin Phillips and Declan Rice sitting in front of their defence.

Whoever is chasing the game is going to leave some gaps, but England have more weapons to make the most of that, including off the bench.

We saw against Denmark how they can respond if they go a goal down, and it was very impressive reaction too. What was really encouraging was the way England kind of turned the heat up a little bit and started creating all sorts of chances.

If the same happens against Italy, and England fall behind again, we know what to expect. I just think with the forward players Southgate has got, they know they will score eventually.

I thought Harry Kane was outstanding with the way he came looking for the ball against the Danes and Raheem Sterling just never stopped causing them problems.

There have been some classic matches at Euro 2020 and while I don’t think we will get a load of goals in this game, it is going to be a thriller because it will be in the balance all the way to the finish.

I think it will go the distance, but England will win it, in the end.

Lawro’s prediction: 1-1 – England to win on penalties after extra time