To celebrate 30 years of the Premier League, The Athletic is paying tribute to the 50 greatest individual performances in its history, as voted for by our writers. You can read Oliver Kay’s introduction to our Golden Games series (and the selection rules) here — as well as the full list of all the articles as they unfold.

Picking 50 from 309,949 options is an impossible task. You might not agree with their choices, you won’t agree with the order. They didn’t. It’s not intended as a definitive list. It’s a bit of fun, but hopefully a bit of fun you’ll enjoy between now and August.

It is fitting that the BBC’s match report did not even mention N’Golo Kante.

The humble Leicester City midfielder’s masterclass was overshadowed by talk of Jose Mourinho’s decline at Chelsea, a man-of-the-match performance from Riyad Mahrez and Jamie Vardy scoring his 15th goal of the season.

Leicester’s 2-1 win against Chelsea was played on a Monday evening in December 2015, too late for a Match of the Day dissection and too early for a Football Focus recap. Mourinho was sacked as Chelsea manager three days later and that became the game’s dominant narrative.

In a chaotic month of Premier League football, there was little space to talk about the subtle genius of Kante. He gets an eight out of 10 at best in the immediate match ratings for this performance. Yet no one could predict what was to happen to him or his Leicester side that season.

In December 2015, Kante was merely the successor to Esteban Cambiasso in Leicester’s midfield. If you look closely at the match graphics for this game for US broadcasters, you will see his head has been photoshopped on top of another player’s body. He was that much of an unknown at the time. 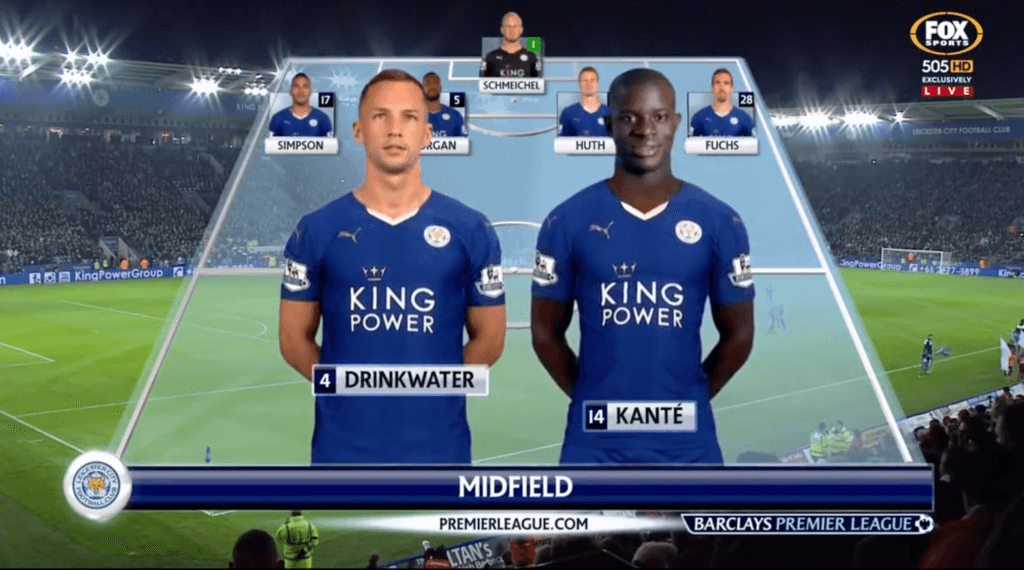 In true Kante style, he caused one of the shocking events of the season and only a small group of people realised what he had done.

Watch the game back now, however, and you cannot miss him. At a time when the Premier League was surrounded by high chaos and indecision, Kante dominated through his clarity of vision.

His first touch comes after 41 seconds, when he chests down an up-for-grabs ball after Vardy nudges it away from Ramires. His initial pass forward is shaky but from there he is away, regaining possession seven seconds later from Willian and laying it off to the left before surging down the flank.

Danny Drinkwater’s pass from deep will miss Vardy but the blueprint for the game is set early: every time Chelsea think they are in a position to play through central midfield, Kante will stop them.

In 2022 Kante is still something of an enigma, despite his many accolades and plaudits. Football fans are split as to whether he is a defensive midfielder or a box-to-box operator. A good Kante performance will see him described as “being everywhere” but there is debate as to whether he should start at the base of his team’s midfield or be pushed further up the pitch and allowed to roam.

Kante is more than just a high-energy road runner; he has an appreciation for how space and time intersect on a football field that can often border on precognition. Former Leicester team-mate Andy King once regaled Kante’s ability to tackle without the ball ricocheting off his foot. At Euro 2020, France boss Didier Deschamps described him as “very efficient at the construction of the game”.

He accurately measures his distance to the ball and opposition players before figuring out the correct angles of approach and the time it will take to travel between him and his target. He is also able to consider how the direction the ball is travelling on the pitch, the pace on it, whether it is likely to bobble or ricochet, and how any alterations may affect the behaviours of people around it.

Two minutes in, Kante is positioned partially inside the centre circle as Chelsea attempt to head the ball forwards. Willian — who is an inch taller than Kante — attempts to run in front of the Leicester man and head the ball back to a team-mate but Kante waits, unflustered, and wins the aerial duel.

Kante’s game starts off with soft nudges, first disrupting Chelsea moves before creating them for Leicester. He rarely touches the ball more than three times in a row as Claudio Ranieri’s side want to play quickly. He gets balls forward for Vardy and Mahrez to chase.

His midfield opponents are Ramires and Nemanja Matic and neither man can grasp Kante’s constant activity in the middle third. Drinkwater makes good use of the added time on the ball that Kante’s hard work allows him.

Leicester only have 34.6 per cent of the ball but this was no smash-and-grab victory. Kante’s ability to win the ball constantly takes Leicester from a place of vulnerability to one of counter-attacking strength.

John Terry, in particular, has little answer for the speed at which Vardy chases after balls in the channels. He is eventually substituted in the 53rd minute for Cesc Fabregas, with Chelsea a collection of white shirts waving a white flag, as Mourinho attempts to stem the tide in midfield by going to a 3-4-3.

Kante’s movement and interceptions mean any combination of midfielders who try to play around the centre circle are outmuscled. He is constantly moving up and down, forever altering his body position in order to better prime himself for a potential ball win.

Kante can run laterally faster than most people sprint in a straight line, meaning he can match the pace of a Chelsea winger’s run down the flanks without having to face his own goal too much. When Eden Hazard or Willian manage to deliver a cross towards the Leicester box, Kante is already facing the ball as it travels towards him. He has a fraction of a second more to make a decision compared to everyone else. What he does with that extra second is nearly always right.

Leicester’s first goal comes from a canny Kante intervention after a long pass down the right from goalkeeper Kasper Schmeichel. Cesar Azpilicueta heads the pass into central midfield, upon which Oscar tries to get onto it.

After snaffling the loose ball, he then hits a pass with the outside of his boot to Vardy, taking four Chelsea players out of the game.

Vardy then passes to Leonardo Ulloa, who moves the ball to Mahrez and the Algerian delivers a cross from the right that Vardy finishes. It’s a devastating counter-attack.

When Vardy celebrates by the corner flag, he is surrounded by team-mates who praise and pat him on the back for his first-time finish. It is easy to lose track of Kante in the huddle but he is in there somewhere in the outer ring of the huddle; the quiet enforcer who helped make everything happen.

Mahrez’s brilliant goal in the second half, coupled with Kante’s continued brilliance, means Chelsea barely get a look in. A late goal from Loic Remy is little more than a consolation as they slide down to 16th in the Premier League table and the great Mourinho inquisition begins.

Kante’s match-reading ability was too good, his legs were too quick and his team-mates were too confident in Ranieri’s game plan. As Leicester fan T-shirts would later read: “70% of the planet is covered by water and the rest by the Kante.”

Look at Kante’s heat map. He’s not dominating a particular area of the field but sprinkling himself around in small spurts. 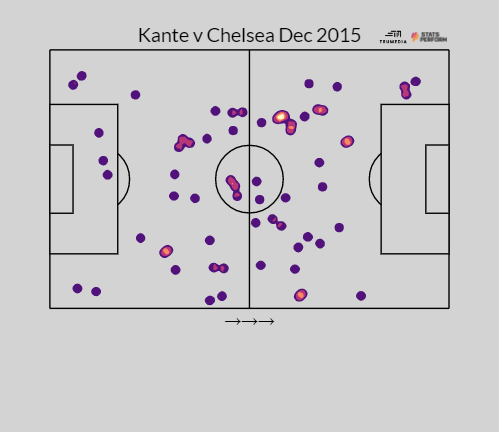 It can look chaotic and unfocused, before we apply another lens and realise the sheer variety of actions he has made across the game. 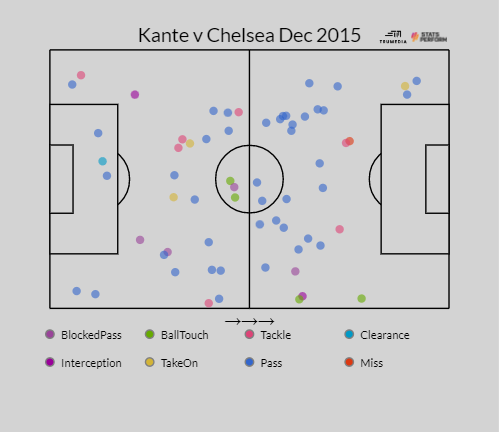 Across 90 minutes, Kante did every single thing a football player can do to bring about a victory for his team apart from score or register an assist.

Afterwards, Ranieri said: “Kante is amazing. He recovers all the balls, in this stadium, the other stadiums, everywhere.”

Kante is a midfielder who operates on a different visual plane to everyone else; prompting the viewer to reinterpret the picture. The benefit of hindsight helps, but when you tilt your head and squint at Leicester 2-1 Chelsea, you can find Kante — the hidden genius of this game, quietly underpinning the stories of Mourinho’s fall and Leicester’s remarkable rise.

He is there, years before the World Cup and Champions League triumphs and months before the most improbable Premier League title. This is 90 minutes of brilliance from a compact game-changer.

In December 2015, you weren’t supposed to know who Kante was. And then one Monday in December, he told you — by winning the ball back, again and again, and again.

In an unexpected development, Chelsea have reportedly ‘made an enquiry’ to sign Man Utd captain Harry Maguire as part of a swap deal. Well,...

Transfer confirmed  Real Madrid manager Carlo Ancelotti has confirmed that midfielder Casemiro will leave the club this summer, ahead of a reported move to Manchester United. On...