When news broke over the weekend that Juventus‘ offices in Turin and Milan had been raided by police, minds were cast back 15 years to the Calciopoli scandal which ripped apart Italian football and decimated Juve for years to come.

This latest probe is focused on the club’s transfer dealings, profits from deals and agents fees finalised between 2019 and 2021.

The Italian football giants have been accused of false accounting and the president of the Italian association for the protection of consumer rights (CODACONS) believes Juventus could be demoted to the second division and have Serie A titles stripped if it is deemed they gained an unfair advantage over rivals.

‘The accusatory system is very serious and throws a sinister light on the last football championships, also because there has been a real Juventus dominance in recent years, which ended in the past year,’ Marco Donzelli said, quoted by TMW.

‘If Juventus were to have illegitimately gained an advantage over rival clubs with operations of this type, then the regularity of the last football championships would fail and, as a consequence, the Federation and the Authority for market competition will have to intervene and sanction those responsible.’ 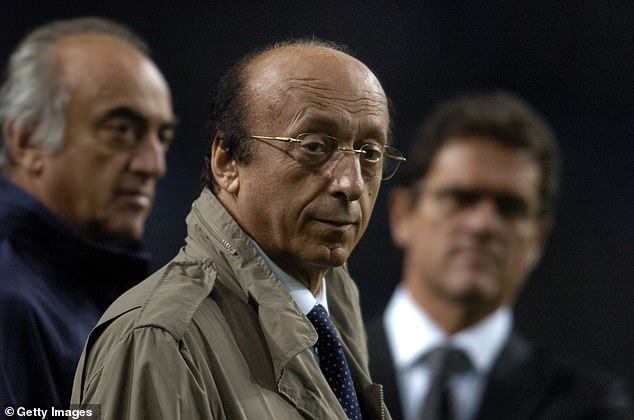 Former Juventus general manager Luciano Moggi (pictured) was found guilty of being a leading figure in the Calciopoli scandal, which is the most damaging in Italian football history 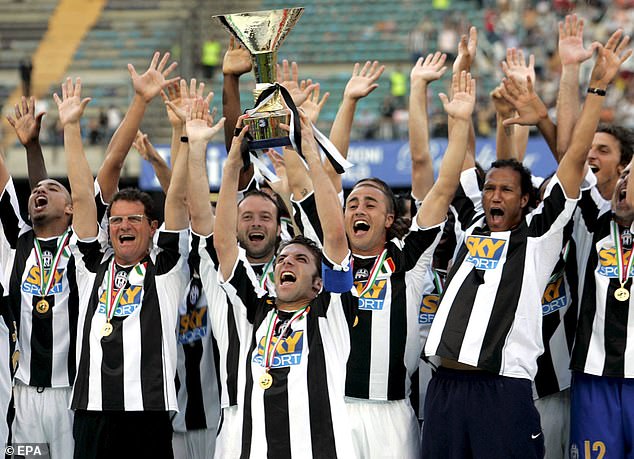 Police confirmed the investigation into the accounting and key figures at the club, such as Pavel Nedved and president Andrea Agnelli, are among those being scrutinised.

Italian outlet Gazzetta dello Sport claims that 42 transfers – including those involving Joao Cancelo, Arthur, Danilo and Miralem Pjanic – are being analysed by authorities.

Indeed, Juventus have only just got over the embarrassment of Luis Suarez’s Italian passport scandal of last year, when it appeared he was set to move to Turin.

The Uruguayan forward caused a stir after he was accused of cheating in the Italian language exam he needed to pass to secure residency in the country and move to the Serie A champions.

An investigation determined the striker had cheated and the professor and director of the university where Suarez took his Italian exam were suspended for eight months following a police investigation.

But nothing brought more shame and embarrassment to Juventus than Calciopoli.

Here, Sportsmail looks back at Calciopoli and how an investigation into alleged doping soon unearthed something far murkier which brought devastating consequences for Juventus and Italian football. 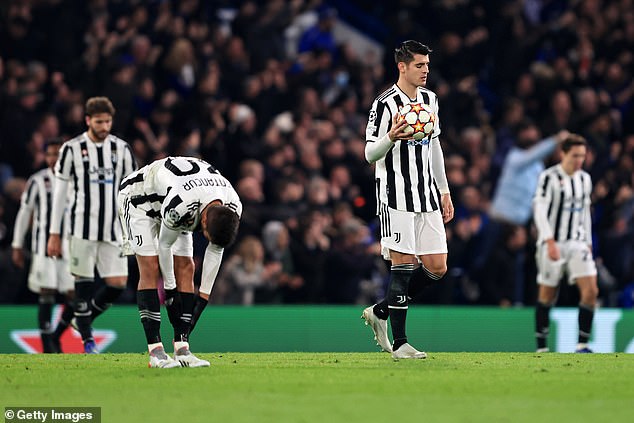 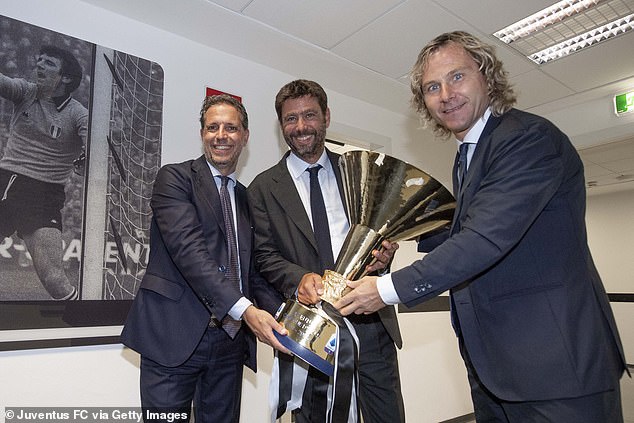 Whenever the Calciopoli scandal is raised as a topic of discussion in Italy it stirs up plenty of emotion.

Question marks had been hanging around Juventus since the late 1990s and in 2004, following a two-year investigation, club doctor Riccardo Agricola was sentenced to 22 months in prison after he was found guilty of providing erythropoietin (EPO), a performance enhancing drug, to players between 1994-98.

The club itself was eventually cleared of wrongdoing and were not stripped of their titles – they won Serie A three times and a Champions League in that period – but it left a dark cloud.

And so, at the end of the trial further examinations were undertaken by authorities as they looked into the GEA World player agency, ran by Alessandro Moggi, son of former Juventus general manager Luciano. 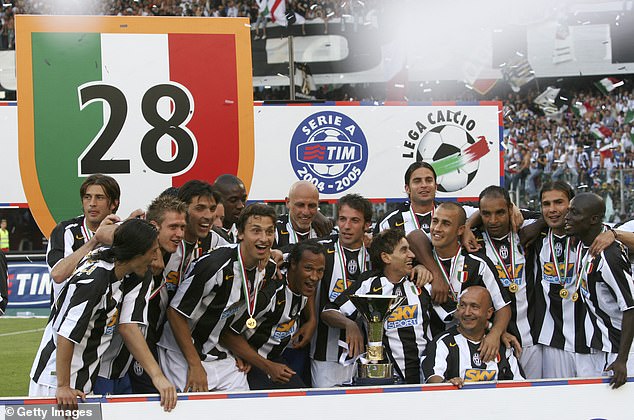 A task force was established and there emerged myriad documents and transcripts of wire-tapped phone calls which brought Italian football into disrepute.

Luciano Moggi, along with ally Antonio Giraudo, who was also caught up in the Agricola scandal, was accused of trying to influence Juventus’ results by pressuring delegators into allocating certain referees for their matches.

Thousands of hours of calls, unearthed via wire-taps across the 2004-05 and 2005-06 seasons, were leaked in transcript form to Italian newspapers and the scandal dominated Italian football.

One such transcript that emerged in the papers focused on a call between Moggi and Pierluigi Pairetto, the president of the Italian Referees’ Association, who was often nicknamed ‘Gigi’, in August 2004.

Juventus had just drawn 2-2 in a Champions League match with Swedish side Djurgarden and Moggi was incensed because Juve striker Fabrizio Miccoli had had a goal chalked off. 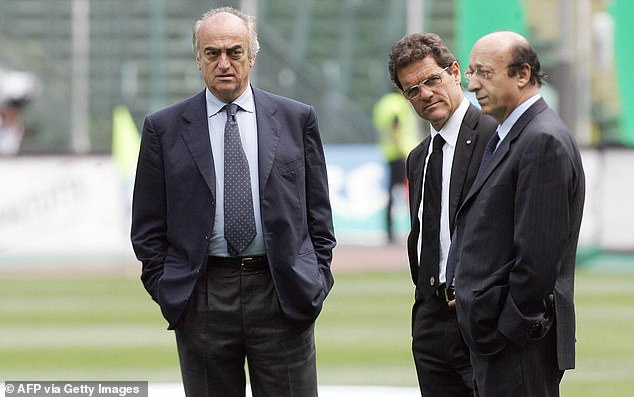 Along with Moggi (right), former Juventus CEO Antonio Giraudo (left) was caught in the sting

Moggi: Gigi? Where are you?

Pairetto: Oh, Fandel is one of the best.

Moggi: I know, but Miccoli’s goal was valid.

Pairetto: No, it was right in front [of the ref].

Moggi: What are you talking about? It wasn’t in front. All throughout the match, he messed things up for us!

Pairetto: But he’s one of the top…

Moggi: He can go and f*** himself. And for Stockholm [the return leg], I’m counting on you!

Pairetto: For f***’s sake. Mamma mia. This surely has to be a proper match.

The match-fixing scandals of Milan and Lazio in the 1980s soon found themselves dwarfed by the scale of what was unearthed against Juventus and Luciano Moggi.

Investigators pursued two allegations which concerned him and his son Alessandro.

Luciano Moggi was accused of pioneering a scheme that pressured referees, through delegators, into giving favourable decisions for Juventus in matches.

GEA World, run by Alessandro Moggi, was alleged to have established a culture of bullying players into signing for the agency and agreeing to contracts ‘against their will’. 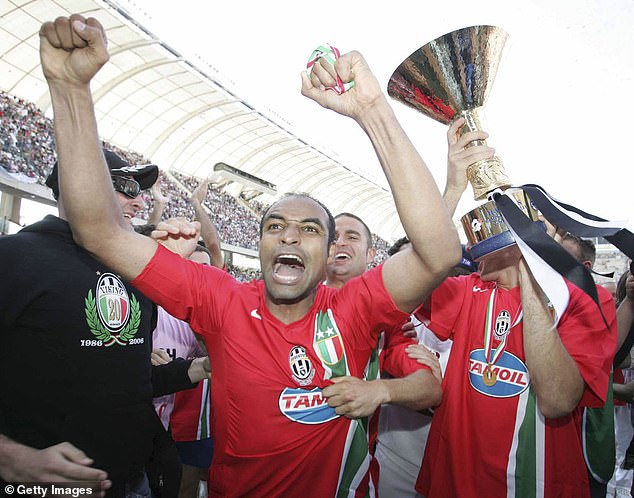 Juventus: Relegation to Serie B and -9 points for 2006-07 season. Originally deducted 30 points but that was later reduced on appeal

Lazio: Deducted three points and kicked out of the UEFA Cup for 2006-07

Fiorentina: -15 points in Serie A for the next season, kicked out of the Champions League and they had to play two games behind closed doors

AC Milan: -7 points in Serie A for the next season. Had to play one match behind closed doors.

Luciano Moggi, along with Giraudo, were accused of pressuring match officials.

In one example, following a 2-1 defeat to Reggina in November 2004, Moggi and Giraudo are alleged to have accosted referee Gianluca Paparesta in the dressing room, along with his two assistants, and questioned why they did not favour Juventus. Those allegations have been strongly denied by Moggi and Giraudo since.

It was suggested that Moggi attempted to influence results by pushing for certain referees to be appointed should they be more likely to favour Juventus in what were viewed as 50-50 decisions. These pieces of evidence later proved to be inconclusive against the former Juventus chief.

Juventus were not alone in being caught under the cloud of scandal; AC Milan, Lazio and Fiorentina all found themselves under the microscope for establishing a similar system of influencing referees.

On July 4, 2006, just five days before Italy’s triumphant 2006 World Cup final win against France in Germany, Italian prosecutor Stefano Palazzi called for the four accused clubs to be kicked out of the top flight.

Juventus, Lazio and Fiorentina were all initially demoted to Serie B but it was only Juventus that remained in the second tier on appeal.

Moggi, despite maintaining his innocence, and Giraudo were found guilty of pressuring referees and procuring favourable officials through delegators.

The 2004-05 title was left unassigned but Inter Milan were later awarded the 2005-06 title, fuelling the animosity between the two sides. 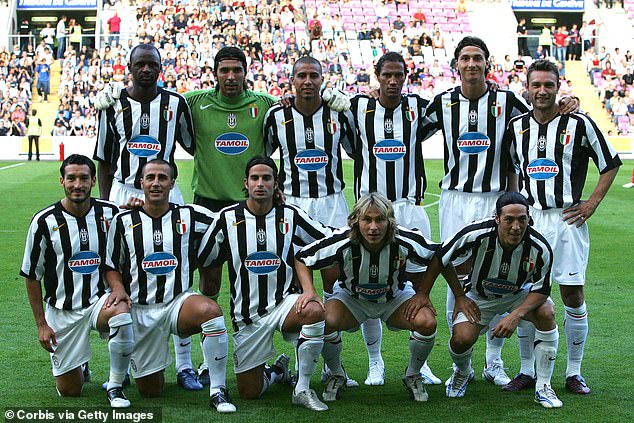 Juventus were originally sent to Serie B – for the first time in their history – and docked 30 points for the following season, having had the 91 points of 2005-06 expunged. It was later reduced to nine points and they spent just one season outside the top flight.

But the punishment for Calciopoli, loosely translated as ‘Footballgate’ in English, remains one of the harshest punishments in European football history for one of its biggest clubs.

Luciano Moggi was initially banned from football for five years but was later barred from Italian football for life for his involvement.

‘I thought about suicide in the first days after the Calciopoli news. Only faith in God saved me,’ Moggi revealed in the the Netflix documentary Bad Sport.

‘I had become everyone’s target. The system did not exist, but only I had to pay.’

He added: ‘I was no longer serene and I was also ashamed to walk the streets and at that moment I thought about many things, including suicide.

‘Yes, in the first days after the news and the great media hype I thought about suicide to put an end to everything.’ 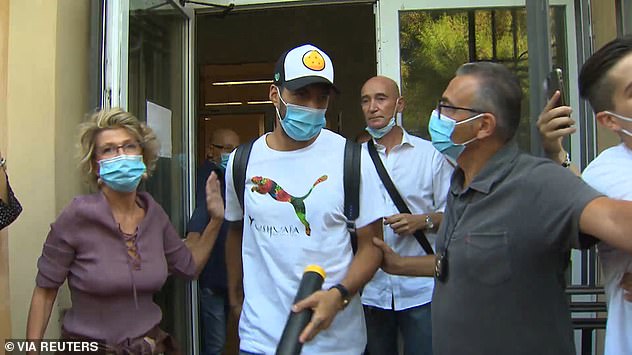 Juventus were never judged to have breached Article 6 of the Italian Football Federation’s laws of the game – illicit activity such as match-fixing – but the reputational damage and public humiliation from the leaked wire-taps was earth-shattering.

Star players left for rivals – Patrick Vieira and Zlatan Ibrahimovic went to Inter Milan while Fabio Cannavarro went to Real Madrid – and Juventus were the only team banished to the second tier following a series of appeals.

There is a sense in Italy that this latest transgression on accounting is likely to be overlooked, much like the Suarez Italian exam scandal, but if prosecutors find serious malpractice and push for convictions, Juve fans do not need to cast their minds back too far to see the repercussions from Calciopoli and may well fear the worst. 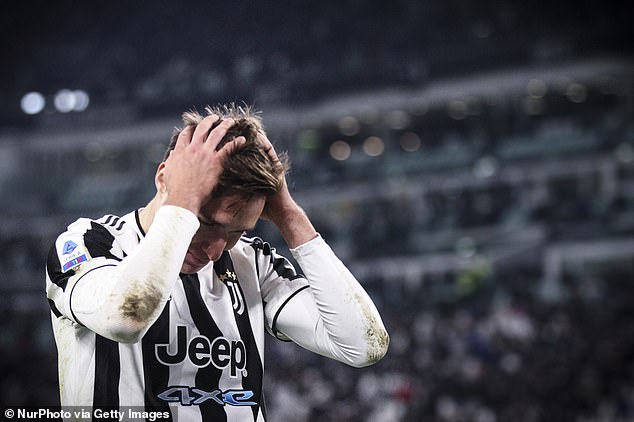 Following the raid on allegations of false accounting, Juventus fans are fearful of another drop