PSG will look to extend their lead at the top of the Ligue 1 table on Sunday when they travel to the Stade Geoffroy-Guichard to face Saint-Etienne.

The Parisians have played 14 games so far, winning 12, losing and drawing one each so far. The month of December is yet to start and they are already looking like running away with the Ligue 1 title under Mauricio Pochettino.

After the midweek Champions League away defeat to Manchester City, which guaranteed second place for the Paris-based club, Pochettino will be hoping for a response on Sunday.

Paris Saint-Germain received a massive injury boost when Sergio Ramos was involved in the squad against Manchester City for the first time after recovering from a muscle injury that has troubled him since the summer.

However, Pochettino and co. suffered setbacks after the Man City game with injuries to Ander Herrera and Nuno Mendes. A small quadriceps lesion problem is set to keep Marco Verratti out for another three weeks, while Julian Draxler and Rafinha will miss out again.

Gianluigi Donnarumma is still recovering from a stomach illness that has kept him out of the last few games, although he was an unused substitute at the Etihad Stadium.

Keylor Navas has continued to be PSG’s no.1 in goal, despite the acquisition of Gianluigi Donnarumma on a free transfer from AC Milan in the summer. The Costa Rican is expected to be between the sticks on Sunday.

Due to a quick turnover, Pochettino could rotate his squad. This could see Sergio Ramos finally make his long-awaited PSG debut this weekend against Saint-Etienne. 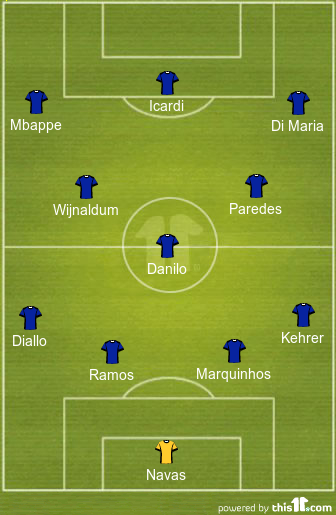 The experienced Spaniard may come in for Presnel Kimpembe, who returned to the PSG lineup against Manchester City after missing out on the last two games with a thigh problem.

Marquinhos should continue at the heart of the team’s defence with Thilo Kehrer getting the nod ahead of Achraf Hakimi at right-back. Nuno Mendes sustained a small knock against Manchester City, so we could see Abdou Diallo start at left-back at the Stade Geoffroy-Guichard.

Changes are imminent in midfield as well, with Danilo and Georginio Wijnaldum coming in for Ander Herrera and Idrissa Gueye. Leandro Paredes started against Man City, and he along with Wijnaldum and Danilo will look to control the tempo of the game against Claude Puel’s side.

The front three of Neymar, Kylian Mbappe and Lionel Messi were largely kept quiet by the well-drilled Manchester City defence.

With games set to come thick and fast over the next two weeks, Pochettino may look to rotate his squad and keep the ageing Neymar and Messi fresh. Mauro Icardi will be raring to make a mark against a leaky Saint-Etienne defence. Angel Di Maria is an attacking option for the weekend and the Argentinean may replace his compatriot on the right flank.

Frank admits he ‘could not control his emotions’ after…

Bielsa reveals there is ‘no clarity’ on when Leeds striker…

Lage hails Wolves’ ‘personality’ after their…

Eddie Howe hoping to use ‘massive win’ as ‘turning…