Tottenham are reportedly keen on sealing a deal for a top Roma attacker who is struggling for game time under former Spurs chief Jose Mourinho.

Sporting director Fabio Paratici brought in plenty of top young talent over the summer, including the likes of Cristian Romero, Bryan Gil, Emerson Royal and Pape Matar Sarr. And it would appear that he is targeting another in the form of Italy star Nicolo Zaniolo next summer.

Antonio Conte knows Zaniolo’s qualities well from his time managing Juventus and Inter Milan and is a big admirer.

The 22-year-old attacking midfielder, who can also play wide, has made 84 appearances for Roma in the last three seasons. However, he has struggled for minutes under Mourinho this season, playing just 11 times in all competitions.

Now Calciomercato reports that Zaniolo could be handed an escape route by Spurs.

The report adds that he could be available for around €40million. That is largely down to the fact that he enter the final two years of his contract next summer.

Conte wants to add more attacking talent to a Tottenham team that has struggled for goals in the league. Indeed, Spurs have notched just 11 times in 12 Premier League outings.

The Spurs chief is also expected to be busy in January, when he is expected to land at least one new centre-back. A striker to ease the burden on Harry Kane and a more creative central midfield option could also be on the cards.

Who’s number one? Counting down the top five saves of the season by Premier League keepers

Meanwhile, Tottenham are engaged in a war with Juventus for the signing of a top Serie A star, according to reports.

The north London side have been linked with plenty of players from the Italian top flight in recent months. This is due to the arrival of new chief Fabio Paratici, who spent 11 years as Juventus’ sporting director. It is also down to the recent appointment of Antonio Conte, who came in to replace Nuno Espirito Santo on November 2.

Both Paratici and Conte have exceptional knowledge of Serie A, and where best to find quality new players. They are now in the frame to land Dutch centre-back Matthijs de Ligt, whose €150million (£125.7m) release clause becomes active in the summer. However, they will face intense competition from English rivals Chelsea and Manchester City for his signature.

Another target is Milan and Ivory Coast midfielder Franck Kessie. The 24-year-old is an integral player at the San Siro, having bagged 13 goals in 37 league appearances during 2020-21. Milan do not wish to let him leave, but with his contract expiring in June, a winter sale may become their only option. 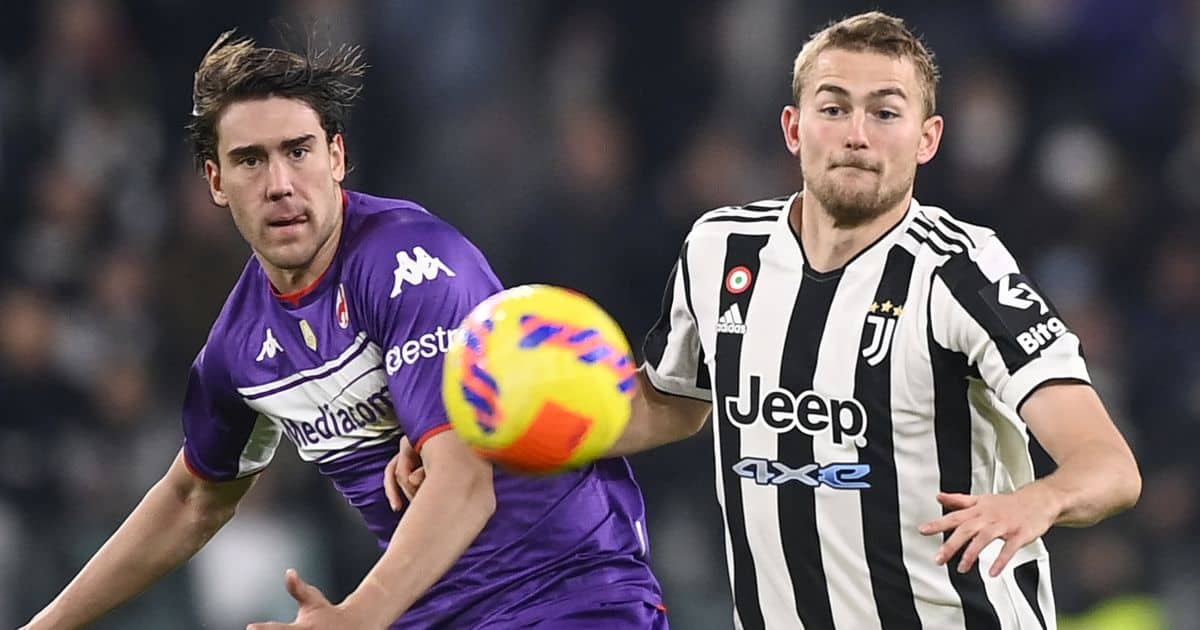 Arguably Tottenham’s dream signing is that of Fiorentina striker Dusan Vlahovic. He is the latest in a long line of impressive strikers for La Viola, which includes Roberto Baggio, Gabriel Batistuta and Adrian Mutu.

Vlahovic’s time in Florence is coming to an end as he will not sign a new contact. As his current deal expires in 2023, Fiorentina must sell next summer to get their ideal price – €70m (£58.7m).

Sport Witness, citing reports in the Italian media, provide a new update on the Serbian’s future. They write that Tottenham and Juventus are the two clubs most likely to complete a deal.

Tottenham are the Old Lady’s ‘main rival’ for Vlahovic’s services, with Arsenal and Man City seemingly out of the picture.

Juve are looking to steal a march on Spurs by opening discussions with Fiorentina. They have been told by Vlahovic’s agent, Darko Ristic, that he will demand €6m in wages per year, after tax.

Ristic is constantly in conversation about his client’s future. His phone ‘never stops ringing’, according to the report.

It seems Tottenham are now the most likely English team to snap up Vlahovic. But chairman Daniel Levy, along with Paratici, will have to act fast if they are to beat Juve to the punch.