Everton wasted a chance to jump into the Champions League places with a performance that belied their position in the Premier League.

While the drama and headlines have largely been created elsewhere, Everton and West Ham United have so far this season been quietly getting on with what football clubs should be doing: building a strong team within their resources. At both clubs there is potential for conflagration. Everton are managed by a former Liverpool manager, while West Ham’s supporters can simultaneously derive great pleasure at the fairly dramatic upturn in their team’s fortunes on the pitch while still retaining deep unhappiness at their move from the Boleyn Ground to the London Stadium.

It would be hyperbole to suggest that either club is on a ‘knife-edge’, but it’s not difficult to imagine how the atmosphere could quickly turn poisonous. And perhaps such concerns are for another day anyway. It’s a bright, sunny afternoon on Merseyside and we’re back after yet another of those international breaks that don’t allow new league seasons to build much momentum. Considering everything, neither side had too much to complain about going into this particular match.

Even on this particular Sunday, Goodison Park is being outshone by events elsewhere, and for much of the afternoon it feels somewhat as though everybody’s minds are wandering. West Ham come out like a greyhound from the traps (understandable, considering their lacklustre performance against Brentford last time out), but they’re all heat and no light, and although the first ten minutes give them 80% of possession – it’s still 69% by half-time – it’s not too much of a challenge for Everton’s defence to soak it all up.

By the interval, each side has had a single shot on target each, but the best chance of the half doesn’t involve a touch of the ball. After 26 minutes, Angelo Obgonna works himself into some space on the right and drags the ball back for Alex Iwobi, but Iwobi slashes at thin air and the ball rolls harmlessly under his foot and away to relative safety. It had been that sort of half. And while Everton do come out for the second with a little more purpose than they showed in the first, with an hour played both teams look more than a little like someone who’s arrived home after a night out, only to find they’ve left their keys in the pub. 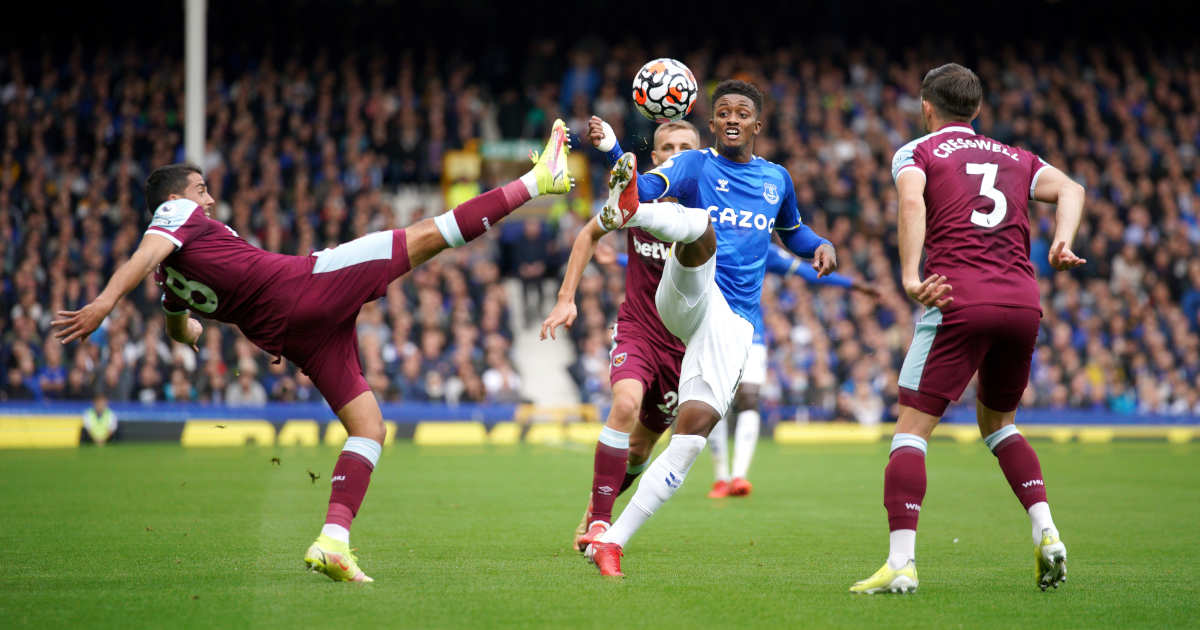 But with 17!minutes left to play, Goodison Park is suddenly jolted to life by a goal. It comes for West Ham, and it comes from a set piece; a corner from Aaron Cresswell is hit firmly towards the near post and Ogbonna flicks the ball across the face of goal. Within five minutes, West Ham have shuffled their pack and switched to what looks very much like a back five. David Moyes can probably see that this is his best route to three points. There’s been little football of the free-flowing variety in this match; better to try and sit on a lead that has been a long time coming.

As the match moves into its closing stages, Everton are increasingly infuriating. Short passes when there’s an acre of space to run into. Passes going needlessly astray. And when they do get into something approaching a position, crosses are blocked or otherwise too easily repelled. Set-pieces feel like an afterthought. Throughout the final ten minutes Everton don’t even look much like a team chasing the game, and the best of the late half-chances fall to West Ham, although to describe even these as the ‘best’ of anything feels like something of an overstatement.

This will, of course, be a very satisfying win for Moyes, and it remains difficult to argue with the job that he’s done with West Ham since his appointment. They’re up to sixth place again in the Premier League, level on points with Manchester United and Everton, who they’re now above by virtue of a single goal scored. While this was hardly their most accomplished performance of the season, if either team deserved all three points from this game it was them. They were defensively solid for the most part, and had the one set-piece which was enough to separate the two teams.

But Everton remain a curate’s egg of a team. A win from this match would have pushed them into a Champions League place, but on balance it’s probably reasonable to say that, had the decisive set-piece gone the other way and they’d won the game, they’d have done so without much of a Champions League performance. This will go down as something of a wasted opportunity, even though they didn’t create too many opportunities to actually waste. The home support tried to get behind them, but for much of the match there was little to actually get behind. With his unbeaten home record at Goodison Park over, it’s back to the drawing board for Rafael Benitez.