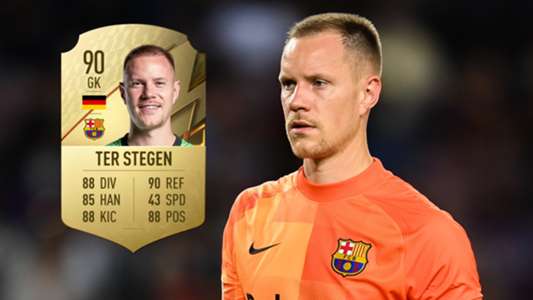 Barcelona lost one of the greatest players in world football this summer as fans will have to adjust to not seeing the club’s badge next to Lionel Messi’s name in FIFA 22.

The Argentine icon is instead a member of Paris Saint-Germain after departing Barca, leaving behind a team that made several notable summer acquistiions.

So, what are Barca’s player ratings in FIFA 22? Ahead of the game’s release on October 1, Goal has everything you need to know about how the players have been scored.

With Messi now gone, Ter Stegen takes the top spot at Barca with a 90-rated card.

Just behind him are summer signing Aguero and midfield star De Jong at 87, while stalwarts Alba and Busquets check in at 86.

Summer signing Memphis Depay has an 85-rated card, while Gerard Pique has been downgraded to an 84.

Of the club’s young stars, Pedri has taken the biggest leap up to an 81 overall card, with Dest and Fati both checking in at 76.